RETROPOP SCENE:
THE BENGALI BAULS WOW ME IN BROOKLYN, U.S.A. 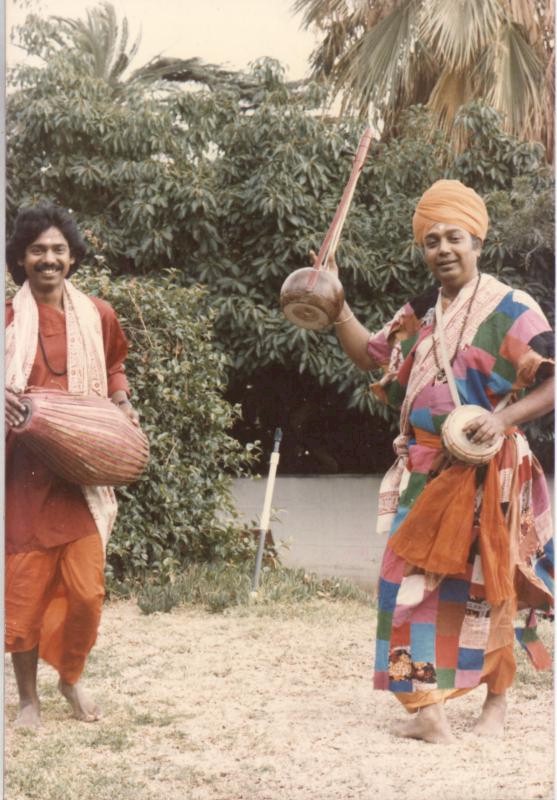 It's Sunday, December 1, 1985.  Babukishan Das, Purna Das' 23-year-old son and rhythm drummer comes to scout me out.  I call him Babu. Babu is also his father's interpreter.  Purna only knows a couple words of English.  Babu knows at least a couple dozen.

"At 4 o'clock, I will come back with my father and we will take you to our concert," Babu says.

How do you like that for service?  These guys aint too heavy on the English but we communicate with ESP.  For instance, it gets to be past 4 that p.m.  I never notice.  My mind's a million light years away.  I'm writing, working on a story, with Sheilah E's In the Glamorous Life album blasting out of the hi-fi.  But I mean BLASTING.

Suddenly, at 4:55 p.m., I realize I'll never hear the buzzer on the intercom from the concierge's desk, 33 floors below.  I shut off the hi-fi, go to the house phone and ring down to the desk.

Babu gets on the house phone.  He doesn't have to say a word.

Purna is waiting on the ground floor with Babu.  Babu's in jeans, but Purna's all decked out in his safron haal, including a white dhuti, which is a skirt that gets tucked between the legs at the calves.  Purna is one of the greatest singers in India.  Purna Das Baul, one of the Bengali Bauls, who describe themselves as men of God but who follow what is more a tradition than a religion.

The tradition has had the Bauls dancing through West Bengali cities like Calcutta for a thousand years, singing songs that tell people to love, to follow the examples of Indian deities Radah and Krisna, to learn from the philosophy of the Baul folk tales and to know just who the Bauls are.  Except  59-year-old Purna has become too famous to work the streets any more.  Tonight, in fact, he's friendly and warm but still reserved and formal.  Well, maybe it's just the language barrier.  I'm no longer nimble enough to hop right over that fence.  ESP works better.

Outside in the chilly rain a van is waiting in the circular driveway in front of this fancy building I'm staying in.  Nobody's fazed by the far-out Indian getups in my building.  The place is loaded with UN, including an ambassador or two.  At the wheel of the van is a Bengali-speaking American who calls himself Beasakhi.  One of Purna's students, Beasakhi has set up the concert, which is being held in the Brooklyn temple of Swami Bhakdivadanta's Krisna Consciousness movement.  Beasahki is secretary of the Brooklyn temple.

Also in the van is Manju, Purna's 45-year-old wife, dressed in a gray sari.  She immediately shows her great charm by trying to hop over the language barrier like it was a tennis net, but I blow the serve.  I’m no help.  I’m up tight.  Manju sings with the band.  She's the lady vocalist.  After the gig gets under way, she sings the first six numbers, and she sings them great.

I can hardly remember meeting Purna, back in 1967, when the Bauls spent some months at Albert and Sally Grossman's house in Woodstock, ending up on the cover of Bob Dylan's John Wesley Harding album.  Sally was instrumental in getting the Bauls to dance over to the States

Purna Das
is much more
than a one-man band

after having stayed at Purna's houses in Calcutta and in the Shantiniketan countryside for eight months.  Sally'd gotten turned onto the Bauls by Allen Ginsberg, who'd started spreading international Baul consciouness after meeting Purna's father, Nabani Das Baul, the master Baul teacher, in Calcutta in 1963.  The two of them liked to smoke pot together.  I got into the act when Garth Hudson of the Band played me a tape the Bauls had recorded at Big Pink.  I talked Garth into producing the tape as an album, The Bengali Bauls At Big Pink, selling it to Buddah with myself as associate producer.  I also wrote the liner notes.  The album's a collector's item now. That's how I got into the act.

Purna and his family'd arrived in the States this trip on September 23 to tour with world-renown sitarists Ravi Shankar and Aly Akbar Khan in an Indian music festival that'd camped in L.A., San Francisco, Philadelphia, Boston, Washington, Chicago and New York.  It was Allen Ginsberg who'd reminded Purna to look me up when he got to New York.  The first time Purna phones me, he stands me up.  That's OK.  The language barrier.  Finally we zero in on each other.  First Babu scouts me and then they pick me up and take me to the gig.

At the Krisna Consciousness Temple, I can't smoke a cigarette, but the place reeks with incense from the Govinda Boutique on the street floor.  The Brooklyn Temple is a palace compared to the dives Swami Bhakdivadanta used to rent on New York's lower East Side when he first came over from India to start spreading Krisna Consciousness in the U.S.  Like in a mosque, you take your shoes off.  The Swami's devotees are the people who march through New York wearing safron robes, shaved heads, painted faces and percussion instruments chanting, "Hare Krisna, Hare Krisna."  They always look happy.  My children used to march with them when they were with their baby sitter, the late, great Barbara Rubin, a celebrated underground filmmaker, who was also a friend of Allen Ginsberg.

Purna and his troupe take over the temple's "Life Room" to hang out while Babu changes from his jeans to a red panjabi and safron dhuti.  He looks as comfortable as he did in his jeans.  Only one number into the gig and his red panjabi starts getting a sweat stain down the spine.  Babu plays what's called a khol, an ancient clay drum that he holds on his lap and bangs at either end.  By the time the gig is over his panjabi is soaked with a couple of pounds of sweat.

There's also one other member of the troupe, the tabla drummer, Badal, who's now studying in America with a crib in Jersey.  He shows up with his wife and son.  Meanwhile Purna is putting on his purple turban while Manju keeps shaking her head no until he gets it right.  When it's time for the performance, the four of them sit in the lotus position on pillows covering a low platform in the auditorium, where the audience for the most part sits on the floor.  With Manju opening the show, the crowd is delighted.  I didn't really know what to expect.  It'd been so long since I heard the record.  The songs end suddenly but drummers Babu and Badal always manage to end together and with a surprise flourish.   When is Purna going to open his mouth?

I've been trying to set you up for Purna's performance the way I got set up, but I now have to let the cat out of the bag.  Because to witness a performance by Purna is to experience something you will never ever forget in your life.  I'm sitting behind the low platform, the stage, when the show starts with Manju singing six songs straight.

"So you're Mrs. Das?" I'd asked her in the van.  Well, she also could've been called Mrs. Baul.  I just wanted to make sure.  Boy, am I gonna tease Purna.  How about mixing them up, friend?  I'd arrived with American preconceptions about entertainment, see.  I mean the lady sings six songs straight and Purna doesn't open his mouth?

Under his left arm Purna holds what looks like a gourd, excepts it's a lot more than a gourd.  It's an ingenius two-stringed instrument called a khamak.  The gourd is hollow with an open mouth so you can get your hand in it.  You can even get two hands in it.  While you've got the khamak in a football grip under your left arm, you're also holding the two strings attached to the bottom inside the hollow gourd with your left hand.  You heighten or lessen the tension of the strings with a flick of the wrist, depending on what sound you want to get.  Meanwhile you're plucking the strings with a football shaped plastic pick held in your right hand, which you stick into the mouth of the gourd.  The khamak is like Purna.  You look at it and you have no idea what you're about to hear.

When Purna finally throws his head into the air what you immediately recognize is some of the most beautiful singing you're ever going to hear.  I don't understand Purna's words but his passion is in a universal language.  Everybody understands passion.  Soul.  This cat's got it, man!

After a few notes of this beautiful singing, you're suddenly jolted by what sounds like a symphony of percussion instruments punctuating Purna's song.  You find it hard to believe that all this electrifying rhythm and cross-rhythm, all this compelling accompaniment, all this sound that sounds like an Indian cousin of any rock and roll you'd ever want to listen to---including Sheilah E's percussion-loaded music---is being played by Purna himself.  How could all that sound come out of one little gourd?  How could Purna concentrate on playing all those different wild rhythms at the same time he's concentrating on singing such enchanting melody?

I would've been knocked on my ass, except I was already sitting on it.  Still on my ass, I slid across the floor to get closer to Purna.  He had the whole room riveted.  Then he started to dance.  Another universal language.  Dance, music and passion.  Everybody can talk in those languages, unless they're just too stubborn to want to understand.  Purna slipped bracelets of bells and shakers on his feet and began dancing on the floor in front of the stage, thus adding more percussion.  You couldn't've been more dazzled by a one-man band.  Still sitting on my ass, my body was compelled to dance, too.

Back home now, writing about that night, I can tell you only that there's no way to describe a performance by Purna Das.  You just had to be there.  You may not talk his language, but you understand him perfectly.  ##

CLICK HERE TO GET TO INDEX OF COLUMN NINETY-FIVE