A Myth-Shattering Biography of an Icon
THE JAMES DEAN STORY
(Copyright © 1975, 1995 Ronald Martinetti) 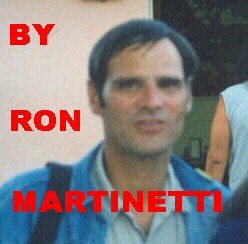 IN HOLLYWOOD, Dean quickly got back into the old groove, dropping by the Villa Capri for dinner his first night in town and calling friends to let them know he was back.  One girl he called upon his arrival home was a shapely Swiss-born actress he had met the day before leaving for Texas.  Her name was Ursula Andress, and she also was a friend of Dick Clayton's.  In true Hollywood storybook fashion, their first date was chronicled in detail in Movie Stars Parade.

Later famous as a James Bond heroine, Ursula was then a nineteen-year-old starlet who had only recently arrived in this country and was under contract to Paramount.  The studio had discovered her in Europe, where she had appeared in several Italian-made quickies like The Many Loves of Casanova.  Until she learned to speak English better, Paramount was keeping her under wraps, hoping to eventually groom her as another Marlene Dietrich.

On their first date, Dean had come by for Ursula an hour late.

"He come in room like wild animal and smell of everything I don't like," she complained in her German accent.  "He stalked all through my house ... then sat down on the sofa and sat staring at me saying nothing." When they started talking, they immediately got in an argument over music.  "It was then I first felt like an American," Ursula said.  "In Europe a woman does not argue with a man."

They joined friends for dinner and afterward went to a club on Sunset Strip to hear jazz.  The band allowed Dean to sit in with them, and he spent most of the evening playing the drums.

"I don't like to be alone, so I went home," Ursula said.  About an hour later Dean drove up on his motorcycle, and after apologizing, convinced her to go for hot chocolate.  They came back to her house, and sitting on the curb, talked until 5:00 A.M.

That same day Dean left for Texas, but as soon as he returned, he and the starlet picked up where they had left off.

"We would fight, then make up, then fight again," Ursula recalled.  She also remembered that "he

Jimmy wanted Ursula Andress
to eat spaghetti for 65 cents,
not steak for $5

always drove like a maniac." They argued about anything and everything, everywhere they went.  Jimmy complained that Ursula's German shepherd was eating him out of house and home.

"It'd be cheaper to have a family," he told her.  At the Villa Capri he objected when Ursula ordered steak.  "It's costing me five dollars every time I take you out.  Why can't you eat spaghetti for sixty-five cents?"

"We fight like cats and dogs.  No, on second thought, like two monsters," Dean admitted.  "But then we make up and it's fun.  Ursula doesn't take any baloney from me and I don't take any from her.  I guess it's because we're both so egotistical."

They both were eccentric, too.  In quieter moments they could be seen sitting in the Villa Capri, barefoot, surrounded by curious diners.

Throughout that summer, their romance was on again, off again.  "I tried to love him, but it didn't work," Ursula later commented.  She claimed that she was not ready for marriage and that he "was too unstable." One story has it that she was finally stolen from Dean by John Derek, the handsome actor who sponsored her career, as he was later to do with another beauty, Bo Derek.

Ursula Andress, however, wasn't the only female with whom Dean was having a personality conflict. For some time he and his landlady had been having a dispute over his odd hours and late-night bongo sessions, and Dean finally decided to move.  Some months before, he had taken an option on Lana Turner's former home atop Laurel Canyon, but changed his mind when a columnist printed an item about it and tourists began flocking to the site.  Now he looked elsewhere.

Nicolas Romanos, the maitre d' at the Villa Capri, had recently put his home in the San Fernando Valley up for rent and moved to the beach, so that his wife, Grace, who was in poor health, could be near the ocean.  Romanos had been having trouble renting his house, but as soon as Dean saw it he decided to take it.

The home, which was destroyed in a fire several years later, was located at 14611 Sutton Street in Sherman Oaks, a quiet residential neighborhood.

Built to resemble a hunting lodge, it had a large living room with a seven-foot stone fireplace, a small dining area, and a kitchen.  There was no bedroom, but a small balcony that jutted out over the living room had a cot on which to sleep.  When Jimmy climbed into bed, he had to crawl through a trap door.

The place had come furnished, but somehow everything in it seemed to fit its new tenant's personality to a tee: In the living room there was a white bearskin rug, an old-fashioned wheel lamp hanging from the high ceiling, and a huge bronze eagle Dean immediately dubbed "Irving." Dean was delighted with the home and took great pleasure in showing it off to friends, always demonstrating how he climbed into bed by means of a wooden ladder.

Otherwise, however, things were not going quite so well.

On Giant, Stevens and Dean had not managed to resolve their differences, and to make things worse the director was faced with new problems.  Elizabeth Taylor had suddenly been hospitalized for a blood clot in her leg, the result, she claimed, of having worn jodhpurs that were too tight.  The blood clot proved not to be serious, and Stevens was able to shoot around Taylor until she was released from the hospital.

But no sooner was she back at work than she suffered an attack of sciatica (severe backache) and had to be briefly hospitalized again.  This time, however, Stevens did not learn of his star's hospitalization until he read about it in the papers, and when he did, he was convinced it was psychosomatic.  Stevens's diagnosis was backed up by several doctors, but even so, when Liz returned to the studio she had a nurse and wheelchair ready in case her pains returned. (Later, when she learned of Dean's death she broke down and was hospitalized a third time.)

Meanwhile, the situation between Stevens and Dean was deteriorating daily.  The early flareups in Texas now seemed mild compared to the range war that was about to erupt.

Starting the last week in July, Dean had a series of early "morning calls that required him to be at the studio at 6:30 A.M. and made up by 9:00 A.M. Twelve- or thirteen-hour days were the usual

When Jimmy
got pissed off,
he just didn't show up

routine: The old Master didn't kid around.  For several days Dean managed to show up on time and ready for work, but by the end of each day his scene still had not been shot.  Upset, the actor complained to a friend that he had "sat for three days ... like a bump on a log watching that big, lumpy Rock Hudson make love to Liz."

Convinced that Stevens was trying to punish him by deliberately postponing his scene, Dean decided to boycott the studio and take a day off for each one he had sat idle.

"I am not going to take it anymore," he told a pal.

The following morning, true to his word, Jimmy failed to show up for a scheduled scene.  Frantically, the studio put in a call to his home and finally reached him at 4 P.M.  According to a studio memo, Dean explained casually that when he got up that morning he was "too tired to work." His absence cost the studio thousands of dollars in wasted time.

Word of Dean's rebellion spread throughout Hollywood. Columnist Sheila Graham printed a detailed account of the incident, upbraiding Dean as "a young, so-called star who after year in pictures wants to teach, instead of learn."

Even the studio's reaching Dean on the phone, she informed her readers, had been "no mean feat in itself, for Dean guards his ... number with the same secrecy the government puts on its nuclear developments.  And even when his right number is reached, he may let it ring for hours and never answer it.  Maybe he just likes to hear bells ring."

Lest anyone miss her point, she added: "I'm getting a bit weary of the offbeat characters who work their heads off to get to Hollywood and then turn around and pretend that this isn't what they want at all.  Jimmy Dean is a prize example."

At Warners, Dean was given a firm dressing-down by Stevens, but apparently he was still not ready to capitulate; several days later he was back on the carpet again, this time for being late on the set.

Dean had been scheduled to do a scene with Mercedes McCambridge.  Miss McCambridge had slipped in her tub that morning and had cut herself badly, requiring several stitches, but she still managed to make it to the studio on time.  Then she and the rest of the cast had to wait for Dean.  When he finally showed up, the director berated him for five full minutes in front of the entire company.  Stevens lit into Dean for his "inconsideration" and told the young actor he had never seen anyone "go Hollywood" in such a short time.  As Stevens stormed off the set, he vowed Dean would "never appear in another film I do." Once again, Dean was roundly knocked in the press.

"Jimmy Dean was late for work one day and you'd have thought he'd committed a crime," she wrote in her column, assuring Stevens, "He's worth waiting for, and I'm predicting he'll steal the picture to prove it."

But the director's tirade worked; knowing when he was licked, Dean gave in, coming as close to apologizing as he ever would.

"The trouble with me is I'm just dog-tired," he told Dorothy Manners.  "Everybody hates me and thinks I'm a heel.  They say I've gone Hollywood, but honest, I'm just the same as when I didn't have a dime.  I went right into Giant immediately after a long, hard schedule on Rebel.  Maybe I'd just better go away for a while."

The rebellion quelled, and, Dean back in the fold, the director was quick to forgive.  He denied the young actor was on any blacklist for future movies.

"A lot of stories going around have been built on minor things," Stevens told the Los Angeles Mirror-News in a story that ran on August 5, 1955.  "The boy's so preoccupied, he's the kind that can be late even if he's right there on the set... But his work is wonderful," the director added.  "Everything went fine when we shot all night at the Statler and Jimmy even showed up for makeup call fifteen minutes early."  ##