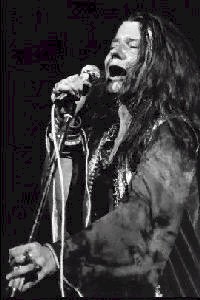 Janis Joplin was Sweet William's idea of a lady.

I don't know whether they ever shared the same motorcycle seat but the way people talk, you'd think that Sweet William always bowed with his hand over his heart every time Janis walked by.

Sweet William had a lot of style, even if it was the kind you picked up working 12 years on the docks as a longshoreman.  Otherwise, Sweet William had all the tenderness of a dump truck.  His hair was long and black.  There was a satanic goatee on his chin.  His face had a way of making you think there was a knife clenched between his teeth.  Sweet William was a Hells Angel.  Janis loved them all.

They'd met a long time before, after Janis first came up to San Francisco from Port Arthur, Texas, hanging out in Haight-Ashbury, looking for a band to ball.  Sweet William was busy helping organize the Diggers then, a band of hippie thieves who used to rob the wholesale commission markets of beef and vegetables so they could give free meals to all the freaked-out kids roaming the streets. Later he joined the Hells Angels and became vice president of the San Francisco club.  Sweet William was maybe the fiercest Angel of them all.

As for Janis, she was to the Hells Angels what a sweetheart is to Sigma Chi. Shall I tell you about the time she played a Hells Angels dance for $2,60?

"That's right," I can remember her telling me, 'two hundred and sixty fucking dollars! Man, I could make $260 a minute but the Hells Angels are friends of mine."

Friends they were, but they were still Hells Angels.  In the end they tried to short-change her a $10 bill.  They charged $1 a head to get into the party and when it was all over they handed $250 in cash to Janis' manager, Albert B. Grossman.  He counted it out, said, "Hey, wait a minute," and then handed it back to them. "You count it," he said. "I don't want to mess up your books."

It happened in March of 1970 in San Rafael.  Janis had just gotten together her brand, new Full-Tilt Boogie Band and this was to be their first public appearance before starting out on tour.  If you've never been to a Hells Angels party, then imagine a fleet of bulldozers trying to act like human beings. The floor creaked beneath their weight. Chairs and tables crunched in their paths.  As they walked, they staggered into one another with leaden thuds.  The hall was swimming in a sodden bath.

There was hardly anybody left able to stand when it was time for Janis to got up and sing.  She had been sitting at a table with Albert and his partner, Bennett Glotzer, talking about a three-and-one-half-hour movie that Sweet William had filmed with the entire San Francisco club

as a cast. Baby-faced actor Michael J. Pollard was at the table and so was Sweet William. Janis was dressed in her usual plumage with her hat tilted drunkenly over her forehead.  As always, she looked like the greatest baglady to ever walk the streets pushing a shopping cart containing all her earthly possessions.

As she weaved her way upright, she reached back to the table and grabbed the near-dead remains of a bottle of Southern Comfort, just enough to lubricate a bad case of the dry-mouths during her performance.  Michael J. Pollard stood up to walk her to the stage and on the way she threw her arms around him, her bottle still clutched in her hand.

Just then an Angel from the San Jose club came up and said, "Hey, man, gimme a drink!"

Janis looked at him blankly.  The bubbles were still fizzing out of her head.

Just then, the Angel's girl friend came up, holding a beer.

"You can't talk that way to a Hells Angel," the girl friend said.

Whooooosh!  The girl friend threw the beer into Janis' face.  A second later and the two ladies were rolling on the floor, clawing, punching and screaming.

'she scratched my face." Janis told me afterwards. 'she pulled an earring out of my ear.  My beads were all over the floor.  I couldn't even see, I just kept punching.  The last punch I took, I found out it was Bennett Glotzer trying to help me up.  I nearly sent him to the hospital.  There I was, lying in a puddle of beer with my feathers all wet and droopy.  I looked like a bird they picked up off the Santa Barbara beach after the oil slick."

What happened was that the San Jose Angel had jumped into the fight to help his girl friend.  Chivalry?  When last seen, he was raising his fist to smash Janis' face to a pulp.  At that moment, Sweet William, still sitting in his chair, leaped clear across the table and, with a single motion, kicked the San Jose Angel in the head.  Then Sweet William wiped his hands, reached down and picked Janis up.

"We sure love each other, don't we?" he said, and he escorted Janis to the stage.

Janis passed out after the encore.  Afterwards, she didn't even remember doing the show. That didn't matter to Sweet William.

"Oooowwhheeee!" you could hear him saying.  'she's so beautiful and loose!  She makes her voice sound like a Harley Davidson Seventy-Four tear-assing a warp in the continuum.  Pearl's always in fourth gear and don't give a good goddamn whose nickel-dime mind she bombs."

To Sweet William, Janis was a lady.  The last I heard of him, he was shot in the back of the head during a gunfight after stopping in for a drink at a friendly neighborhood bar in Fresno.  He had parked his bike outside. He wasn't looking for trouble.  He was alone with his girlfriend but he was wearing his colors. He was paralyzed afterwards with the bullet still in his brain.  It happened on the very day that they scattered Janis' ashes from the Golden Gate Bridge.  ##