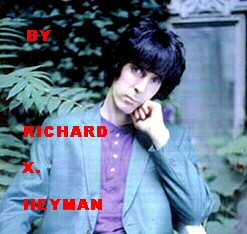 [The following chapter is an excerpt from BOOM HARANGUE by Richard X. Heyman, 138 pages (8.5 x 11, single-spaced, with several pages of photos), available as a download from Richard's website at http://www.richardxheyman.com for the price of  $15. Richard plans on self-publishing hard copies of the book through a Barnes & Noble website.]

Whenever I go to Madison Square Garden to see a concert, I always make a joke about how I've played this room.  And it's true.  Here's what happened.

One afternoon in 1973, while I was sitting at home watching TV (I believe I was watching Mike Douglas at the time), the phone rang.  It was old pal Willy from the Doughboys.  After the Doughboys split up in "69, Willy had gone off to play with a New York group called Jake and the Family Jewels.  They were managed by music writer Al Aronowitz.

Being involved with Al had its perks.  Like the time Willy was invited to go out for dinner.  Al said he had to pick up a couple of friends on the way to the restaurant.  Waiting at a New York corner were the two friends---George Harrison and Mal Evans.

They hopped into the back seat while Willy had to maintain his cool as he unexpectedly shook hands with the quiet Beatle and his long-time friend and roadie.  As they got out of the car, passers-by on the Village street were shocked to see one of the Beatles in their midst.  By the time they reached the restaurant there was a train of fifty or more people following the entourage.

Once inside, they met up with poet Allen Ginsberg, who was meeting George for the first time.  Willy told me the reason for the get-together was to discuss the influx of some bad

acid that had gotten into the hands and mouths of some of George's mates.  George asked Allen:

"What's going on in your culture?"

The bearded beat poet responded that everyone should avoid the acid but continue taking mescaline to stay in touch with their consciousnesses, or something to that effect.  The next day Willy sat front row center at the Bangladesh concert.

Al had also managed the Myddle Class, a Jersey based band whose bass player later married Carole King.  These two groups merged into The Quinaimes Band that was then signed by Elektra Records.  They had a wonderful lead singer in Dave Palmer, who later sang on the first Steely Dan album, and they recorded and released their debut album in 1973.

The only problem was, that after years of struggling, they decided to break up the day the album came out.  This is where the phone call comes in.

Could I possibly play drums in The Quinaimes Band?  Who from the original line-up would be involved, I asked.  No one, Willy told me.  Not one of them wanted anything to do with the whole endeavor.  Willy said he'd recruit John Matarazzo and Jack Parillo, two guys we had a band with in the early 70's out of

Oh, and by the way, our first gig is at Madison Square Garden.  This was basically akin to diving into the deep end of a swimming pool with no water, but I said sure, I'm in.

The next day, the four faux Quinaimes band members rushed through a set of R&B cover tunes we used to know.  We only learned one song off The Quinaimes Band LP, the record we were supposed to be promoting.  If this wasn't thrown together enough, John the keyboard player had recently sold his Hammond B-3 and had to play guitar instead, which was his second instrument.  Barely rehearsed enough to play a gig at a lounge in North Jersey, we found ourselves in front of a sold-out crowd at the Garden.

If you've ever lived through an earthquake, you know that queasy feeling of your knees buckling as the world moves from under your feet. Well, that's how I felt climbing the six steps up to the stage.  I stopped midway and held onto the railing.  I had never been so petrified in my life.  I gave myself a quick lecture on being a man and how if I didn't calm down I would be playing with more than a drum stool under my butt. Why, oh Lord, do you hand us this golden opportunity at the worst possible time?  It would be one thing if we were well prepared and ready to rock, but we were hanging on for dear life.

Frankie Crocker, the New York DJ introduced us and we started with Baby I Love You by Aretha.  The crowd was, under the circumstances, relatively receptive.  All I could think about was not dropping my sticks.  My hands were so sweaty with fear that I felt like I had applied massage oil to my sticks for some deviant sexual act. I had to talk myself down from this anxiety attack or I would have gone into cardiac arrest before the end of the first song.

There was an Indian rug on the stage, and I pretended we were playing in a small club. I focused on the pattern in the rug and convinced myself that the room we were in was no bigger than the stage. The last song we performed was an instrumental I had written

Genya was kicked off
the tour
for swearing at the audience

called Asparagus.  We all got to solo and when I finished my drum solo, the audience were on their feet applauding, or so I am told.  I couldn't see a thing except for a sea of darkness around our raft of a stage that had finally reached the safety of the waiting shore.

A singer named Genya Ravan followed us who was soon to be kicked off the tour for swearing at the audience, which just wasn't done in 1973.  Then Sly would hit the stage about an hour or so later than he was supposed to. He had problems with punctuality it seems.

Sitting in our dressing room, the whole Garden was shaking with thirty thousand people jumping up and down in unison to Larry Graham's thumb-slapping bass.  The Family Stone were an awe inspiring live act, and we all ran out to watch their set from the side of the stage. Sly's hairdo at the time rivaled Marge Simpson, who clearly had taken her cue from the Illusion.

After the show we were feeling pretty high and mighty.  We didn't get booed off the stage and I even got a standing ovation for my drum work.  As the glow of would-be rock stardom shone from our sweaty faces, we were quickly dropped down to the soiled earth beneath our feet.  Our station wagon, parked outside the Garden, had been towed.  How could this happen! We just played to thirty thousand people and now were stranded out on the street.

I ended up having to take the train back to Plainfield, filled with kids from the audience of the concert.  Totally humiliated, I kept my head down and actually overheard two guys behind me critiquing our performance.

"What'd you think of that opening band?"

"They were all right," his friend said, holding back a yawn.  "That drummer was great, though."

What do you do in one of those situations?  Do I turn around and say by the way that was me, thank you very much, like Marshall McLuhan in Annie Hall or do I continue to hang my head until I'm off this wretched train?  I chose the latter.  I suppose God, or whatever it is making these life plans, does have some twisted logic in their design.  Here we're given the chance of a lifetime, but with no preparation. Instead of being a well oiled machine promoting our own album of original material, we were thrust into the spotlight pretending to be a group that nobody had ever heard of in the first place and, not surprisingly, ever heard of again.

We played a show up in Bangor, Maine where we were the only opening act before Sly.  Mr. Stone and company were their customarily late selves and the promoters of the concert begged us to do another set.  The Bangor crowd was so starved for entertainment they gladly welcomed us back onstage, where we went into a long trippy jam, the reason being we didn't have any more songs rehearsed.  The Maine audience seemed to be boogying down and relishing every note as if they hadn't had any live music up there in a long, long time.

Probably was the case.  We were very appreciative of the warm response and it gave me something positive to think of on the bumpy prop plane ride back to

CLICK HERE TO GET TO INDEX OF COLUMN SIXTY-EIGHT