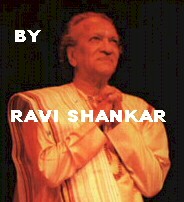 [We found the following, from the Associated Press, in a newspaper and couldn't resist stealing it. We hope that neither the Associated Press nor Ravi will mind its appearance here. The Indian sitar virtuoso, whom we consider an old friend, is completing his last full-scale concert tour.]

ENCINITAS, Calif. -- I feel I have been cheated by George. Why did he have to go so soon at such a young age when I really wanted to go first?

In moments like this, it is so hard to express the feeling of emptiness and sadness within. Like a film flashing by, everything comes to my mind since I met him more than 30 years ago. His childlike quality, his shy but naughty little smile, his passion for all the music he loved and the serious quest for religion, particularly the old Vedic Hindu tradition, always amazed me as well as attracted me.

The down-to-earth quality in George was something I could relate to with such joy. He would crack up when I told him all my jokes; we had such fun! We always competed with each other in punning. When I told him that I was known as a "pundit" because of my punning, he said something hilarious, connecting the old Hindu scriptures of the four Vedas (Rigveda, Samveda, Atharvaveda and Yajurveda). He said: "Do you know the four Wether brothers? They are Ric, Sam, Arthur and George Wethers."

The only solid lessons on sitar he had from me were in the summer and autumn of 1966, which he couldn't pursue as much as we both wanted. He was very talented and would have become a great sitar player if only he could have given some time. His love, knowledge and understanding of Indian music developed immensely over the years. I gave him a copy of the book "Autobiography of a Yogi" by Swami Yogananda, and my brother, Rajendra, gave him a book by Swami Vivekananda. He had such thirst for the knowledge and wisdom of Indian traditions. In many ways he was more Indian than many Indians.

Though I had been performing all over the world since 1954, my association with George attracted a whole young generation to sitar and to me from the mid-1960s. Even though I didn't make any records jamming with him or any other pop or rock star, I was treated like a superstar, being the Beatle George's guru. Then came Monterey, Woodstock and finally the big Bangladesh concert, which he totally handled in producing. Because of George we had Bob Dylan, Eric Clapton, Leon Russell and other eminent musicians.

After a year or so, when he spent time with me in Varanasi at my house, he suggested we make a couple of records and perhaps tour the United States. We did the first recording in the A&M Studios for his Dark Horse label. It was then that he met dear Olivia (whom he married in 1978). In the summer of 1974 the second album was recorded ("Festival of India") at his own studio. I'll never forget those couple of months when we worked on this album. I did all the compositions on the M4 while traveling from London to his home in Henley. George created such an atmosphere with such love and regard. We would start rehearsals in a beautiful large hall with a view to his lovely garden. We would have Indian food and snack between rehearsals.

The recording was finished with simultaneous editing, which George was doing himself, always asking me to hear when he was satisfied. After this period of creative joy we went to tour the United States, giving more than 30 performances. George had a special 737 Boeing jetliner completely refurbished for us to travel in.

What touched me so much was his worry about my health and well being. He would tell me always not to travel and exert myself so much. Then from the role of disciple and friend he became more of a son to me, especially after my own son Shubho died in 1992. He would fly and be with me whenever I was in the hospital or not well with my heart problems. His love and concern touched me deeply.

I'll never forget how much love, care and time he gave to another project he did for me while staying in our house here in Encinitas. He went through all the details, right from choosing all the artwork, to writing the notes, to producing the four-CD boxed set "In Celebration," selections from my 40 years of sitar performances and compositions. The last wonderful musical experience I had with him was when we made the CD "Chants of India." We did some songs in Madras and the major part at his own studio in his mansion at Henley. His nearness and attention in producing the record always inspired me so. Even the complex compositions came out of me so spontaneously.

Another one of many funny incidents was when George, Olivia and their son, Dhani, came to India in 1995 and spent a few weeks. We went to Jaipur, Jodhpur and Udaipur. In Bombay, Delhi and Calcutta people recognized George and created a stampede, which George hated. But we had no such problem in Rajasthan and he enjoyed it so much. On our last stop, Udaipur, while we were walking in the busy main streets shopping ornaments of silver, colourful materials, dresses, turbans, having tea and snacks all of a sudden there was a big crowd which surrounded us. I was terrified thinking they had recognized George, but it was actually me they were after. Then the funniest thing happened. George, realizing the situation, immediately became my bodyguard. "Move, move. No, no. Don't bother Panditji." And cordoning me with both his hands, he brought me to our waiting car and saved me from those autograph hunters. The others were already seated, and when the car started, we burst out laughing.

My daughter Anoushka and my wife, Sukanya, also were so attached to him. He had a beautiful and loving wife in Olivia and a wonderful son in Dhani. He had a magnanimous heart and always cared so much. He was a fearless and beautiful soul always conscious of God. I loved him dearly. Though he is gone physically, he will always be alive and vibrant in my heart.  ##