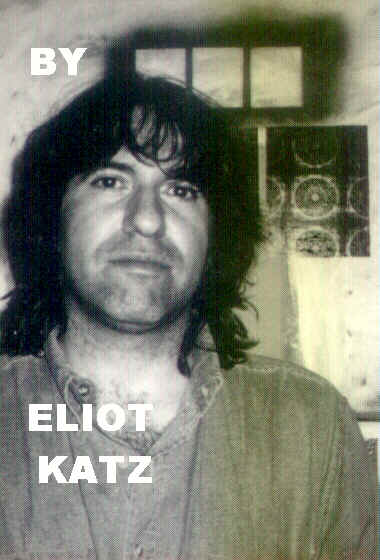 [These poems by Eliot Katz originally appeared in Unlocking the Exits (Coffee House Press, 1999), and are used here by permission of the author.]

On the Museum of Natural History's 4th floor
I greeted my old friend:
"Hey, T. Rex! Long time, no see!"
My buddy flashed his killer teeth:
"Over two years, E. Katz,
I missed you."
Surprised, I asked, "You missed me?
I didn't know dinosaurs had emotions.
Rexy, did you know love?"

Rexy sighed: "I knew love
not as humans can
but as humans do:
love of self
and love of finding something weaker
to pounce upon.
E. Katz, can your species be saved
by love's possibilities?"

"Rexy," I answered, "you haven't lost
your ability
to ask the tough question.

Let me ask you something we humans
have been curious about for centuries.
How did you die?"

A NEW MORNING WARNING POEM
FROM THE CHICKEN POX COOP

O what can I say to you who nurses me through
chicken pox & broken car door locks
who brings me food even in weak moments
when I get rude too hung up
on acting with certitude
to receive your gifts in the unnegotiated way
they are intended.
I suppose I have found it easier proclaiming to the planet
how much about my life & this world
I have learned from you
than to quietly accept these quiet moments
of unconditional love.
I have always been one better at giving than getting
better at forgiving than forgetting
better at feeling guilty about debts
than at collecting on my bets
as a child often wanting to give parents back the gift
of a life before mom & her family
cattle car'd to Auschwitz's torture & death camp:
the gift, of course, no one could ever give back.
Now in adulthood, what do I say to a giving companion
other than I am so thankful for your love.

But my partner hasn't had chicken pox yet
so must sleep on futon in other room
while I lie in bed feeling quarantined
with not enough strength to sit up
more than 10 minutes at a time--
only little reading, little writing, & lots of TV
watching the bombing over Baghdad continue.
Even Maya Angelou's powerful condemnation
of "armed struggles for profit"
couldn't stop our young sax-playing prez in new role
as rock & roll hawk
and couldn't even remain a poetic protest vessel afloat
against the narrowing tide of a "free" cement press
describing it solely as a poem "celebrating"
the richness & diversity of America.
These blisters on my face keep breaking out
as those blistering bomb craters break in:
War is not inevitable:
Many who get it once in childhood
refuse to get it later in life.

How to make sure newly energized counterculture
doesn't become the new air cover
for new U.S. air wars?
What to do now while world's newest baby boomers
scoop drinking water
from bombing's pockmark'd puddles
and play with neon uranium shells littering
Basra's Made-in-America cancer playgrounds?
Once we've been shown even a great public poem
can be made to stand alone
what do you, I, we do now?
O Beauty & Truth! How I too would love to celebrate
but from this sickbed the altering eye alters
all D.C. celebrations to make them look sick!
Look at Les Aspin & James Woolsey up there under TV lights?
Can't every television viewer see those chicken pox?
Hurray the Bush that burned us all has been dethroned.
As Abbie Hoffman once said, better the lesser of two evils
than the evil of two lessers.

Christine's favorite bumper sticker said:
"Clinton will make you sick; Bush will kill you."
From this chicken pox coop, I'd say that bumper sticker
was one hell of a prophet.
As I swallow 2,000 more milligrams of vitamin C
I know these chicken pox will soon heal
but what medicine will it take to heal this
still-sick D.C. bunch?
To watch a real unselfish love become possible for all?
To end this, yes, bombing for profits?
To end this rape, this racism, these ethnic cleansing camps?
To make my job working with homeless families forever obsolete?
What brand of oatmeal bath did that doctor say
would rid the body
of this everpresent itch?  ##

Ah century that has embraced me these past 39 years, that has set
before my eyes so much tumult and catastrophe, that has taken too
many of my friends and ravaged the calendar with my mother's
mother's blood, that has wormed a hole

from earth's core through ozone layer to the sun, I have but one
wish for you: Die my century! why wait? early to bed with you!
Take early retirement, take your granite eyes, your fully paid
tombstone, your electrified casket, your four billion odes to death,

burn your damn books those dastardly lies, lay your plutonium
shroud over leftover legacy, let's be done with you. Artists around
here in all watercolors have prefigured many paths to follow--
choose one: no-warning aneurysm during peaceful sleep, drunken

like Russia's Mayakovsky, you betrayed his dreams as much as
anyone's, over & over & over, so go ahead, straight to your grave,
die my century! it's your time, the signs all there, all 500 TV
channels are screaming bloody random murder,

-- Lester Leaps In now
playing on my CD, these the jazz rhythms A.G. had in mind while
writing angelic Howl, while swinging for the century's fences, ah
Allen's 70th birthday last week, maybe the books are worth

saving from the bonfire, maybe some 20th century visions to carry,
some ways to connect-- maybe, my century, you never intended to
fuck us up? maybe never intended to walk into the bar wearing the
death mask? Whatever your intentions, you're through!

Die my century, we're growing impatient, no need to prolong this
multiperspectival agony, leave now so rebirth may arrive soon, too
many cannot afford to wait-- Goldie's kidneys can't take it much
longer, you've already killed her, what more do you want?

for her, there was too much apartheid far & near, too many youth
shot, too many communities allowed to go broke, too many
pharmaceutical giants allowed to roughshod concrete boots through
city's historic gardens--for Mark, too many fathers

dying ridiculous wars, too many mothers scrambling for shelter, too
many hungry children deserving songs of their own--audrey's
landlord never let her pick up her clothes, robbery by the propertied
class plain and simple, an old-fashioned crime

your courts never learned to solve--what good were you? your
patriarchal capitalisms grew immeasurable tumors, you threw out
socialized medicine before inventing an alternate cure, Ethan lept
off the balcony & nobody knows why, too many too manys,

cover that body, cover that experimental beard, hide that loud
music, cover cover cover blood blood blood cover--now I've got
this throbbing headache, like a hammer at the back of the head
banging from the inside, could be sinus

infection, how am i supposed to be sure when no doctor will see
anyone for days--southern black churches are burning,
Woodbridge's fiery oil storage tanks at this very moment spewing
huge toxic clouds, hawks drop Mid-East bombs on infant ribs,

how beautiful Lester's rhythms of earthly engagement, dead friends'
divine energies digging those sounds, they lived spread out &
diverse, they lived this century as well as died it, they rode the
universe's internationalist intergenerational bus along

your potholed highways & loved out loud many of your bumpy
struggles, -- My beloved pillowcase century! After yr breathing has
slowed, we who endure will send our compassionate imaginations
ahead, will keep our coalitions together with tough new thread,

our desire for change will survive the most callous assassins, so
send yr SS back to their self-made hells, toss torturers East & West
back into their flesh-eating ditches--let go yr thousand demons & yr
one gods, merciful death & even more merciful rebirth,

we will encounter a future, the fourway mirror will forgive,
emancipatory eyedrops will relieve the ache, after the sliding back
& the spiraling forth, the planet & the plan, after the redwood
keyboard & the meditative sprint, the bacbacbac back back

bacbacbac--sometime next century our sketches will come to life...  ##

CLICK HERE TO GET TO INDEX OF COLUMN FIFTY-FOUR