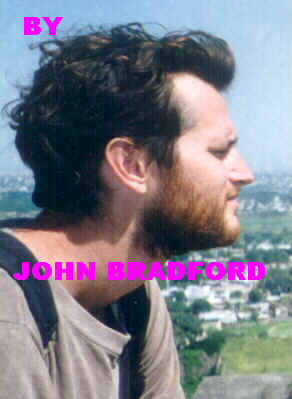 I was 13 and decided I needed a job.  Always broke and already a two time loser in the shoplifting biz, I got a job bagging groceries and stamping prices at a supermarket in our crappy little hick town in Iowa.  After a couple of weeks of this I was summoned to the manager's office one day and asked if I wanted to be the 7 & 8 guy.  As in aisles seven and eight.  The frozen food and refrigerated section.  I said yes.

No more bagging the groceries of semi-retarded shit-kickers.  No more of these dumb asses constantly telling me to put the eggs and fruit on "top of the cans!”  Now I would have the sanctuary of huge walk-in fridges and locker room sized freezers.  I would prowl about in the half dark of my frozen goth caves, running grim errands with numb fingers clutching juice concentrate, frozen waffles and TV dinners.  I pictured myself bursting through the large metal doors in a puff of cold smoke like the guy with the stupid hair in that Flock of Seagulls video.  No more working shoulder to pimply shoulder with my moron colleagues, dorks all, with their corny wide ties, fat chick and fag jokes; I was an independent teenage punk shouting my three chord neck snapping anthems in the privacy of high cholesterol dairy products and microwaveable nutrition-free repasts.

There was only one catch.  Alas, I would have to suffer the company of a co-worker; my aisle 7 & 8 "supervisor," notorious freak, alleged pervert and rumored child molester, Bob Skelly.  Skelly was the prototypical small town Sherwood Anderson loser mixed with some aberrant Ed Gein jailbait lusting DNA sprinkled with a Bernie Goetz hair trigger persecution complex---mix well and let stew for about forty years with a no doubt unpleasant childhood, et fucking cetera and presto!  Right.

I had certainly seen him lurking about the store here and there but he was the type of guy who wouldn't say shit if he had a mouthful, so he didn't seem to bad to me, and besides not being a popular guy myself nor having an exactly sunny disposition, I figured he couldn't be all bad.

The first week of so was uneventful; he told me what to do, I usually did it and that was that.  I did notice though that my boy definitely had some problems.  At least a few times every shift that we were both there I would catch him doing some serious ogling at the female teenyboppers who happened in.  He would stare at them and push his lower lip out with his tongue so it looked like he had a wad of chaw in his mouth.  Then he would begin scratching the outside of his brown polyester slacks like an attack of eczema was crawling up from his knees.  Soon after he would go into the freezer locker and emerge a few minutes later and engage himself energetically at the job for the rest of the shift.  During my trips to the fridge or the freezer I now began to look for any sign to see what Herr Skelly was up to?

Anyway I didn't fancy myself the Louis Pasteur of frozen jissom and instead decided to pop in on the boy after one of his unsubtle displays of lip-licking lasciviousness.

My wait was short lived.  A few days later I spotted him commencing with the routine while staring at none other than my home room dolly Dawn Beverage.  This prick is moving in on my territory, I thought, and even though I had yet to say anything to her, nor she to me, I was fired by the righteous pain of the cuckold---Dawn Beverage. . .you motherfucker!. . .

I waited an agonizing sixty five seconds before I opened the door and entered the walk-in.  In the dim light of the naked bulbs and sub-zero foodstuffs, Bob Skelly was standing and furiously fucking a half-gallon of top shelf cocolate marshmallow ice cream.  His left hand held the cardboard container, his right hand with the middle finger extended was jabbing the vanilla ice cream between the dark chewy cookies of an ice cream sandwich and from out of the corner of his mouth came a James Cagney/carny barker sounding staccato chant of lust: