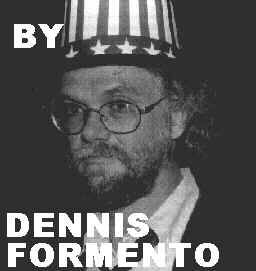 In New Orleans, the police again have suffered the little children to come unto them. Last year, repeated police raids on the growing block parties on Frenchmen Street in the Marigny Triangle neighborhood netted dozens of Mardi Gras revelers whose crimes were as innocuous as momentarily blocking a doorway or spilling beer on a cop's foot.

This year, with hundreds of young people returning to the scene, the story is uglier. The New Orleans Police Department, shorthanded during Carnival season, typically calls upon the Orleans Parish Criminal Sheriff's Office and Louisiana State Troopers to bolster their ranks. But with the stress of overtime hours and the unfamiliarity of Sheriff's deputies and Troopers with the festival's wilder scenes, melees have broken out, leaving in their wake broken limbs, shattered glass and shards of the good feelings that this typically anarchic holiday creates.

Lundi Gras (Fat Monday) is gaining popularity as the hard core prelude to Mardi Gras. More parades and growing numbers of tourists mean bigger crowds on French Quarter streets. The crowds have pushed the freakier people, both locals and nomads, across Esplanade Avenue into the Marigny where they're as happy to avoid the mainstream tourist crowd as the tourists are to avoid them.

The evening began when the police pushed through the mass of drummers and dancers, taking away drumsticks to reduce the "noise," only to return them later. Police diverted a wedding parade that marched against traffic on Decatur Street, ordering them to disperse or be arrested. This caused some of the guests to repair to the river and others to swell the Frenchmen Street scene.

"I didn't want to go to jail wearing a dress," said the best man. A promise of no harassment until four a.m. when the shift changed encouraged the revelers to carry on. It might have been a tiny bonfire of cardboard eighteen inches high that brought police attention back to the scene. Earlier, a group of fire-eaters had performed, using a circus torch upon which they lit the tools of their trade. Tellingly, firemen from the station at Frenchmen and Esplanade, less than two blocks away, were on the scene laughing and enjoying the fire play.

However, in the wee hours, things turned ugly when a man was pulled at random out of the crowd. A lone Sheriff's deputy got out of his car and arrested a man who happened to be standing directly in front of his headlights. The deputy apparently hoped to put a stop to the drumming with the arrest. The man, instead of surrendering immediately, walked over to a chair on the side of the street, put his hands up, and sat down as an act of passive resistance. The policeman clubbed him twice above his right eye. A bottle flew over the car from somewhere in the crowd.

Partying people chanted,
'No violence, no violence,'
but it was too late

Partiers, seeing this, began chanting "No violence, no violence," but it was too late. The cop called for backup, saying "Officer down" into his shoulder radio.

Policemen came with shotguns and pistols drawn. Ordering everyone to the ground, they cuffed people with steel and plastic handcuffs until the cuffs ran out. One woman described lying on her face in a pool of urine and vomit for over an hour. A man on the ground next to a police car was ordered to put his legs under the car and remain still. Unwilling to lie half under the cruiser but equally unwilling to displease his captors, he complied too slowly and was beaten. Police threw a young Texan through the window of The Frenchmen Hotel in full view of guests, then pulled him out and beat his head and shoulders. Then they cut him loose almost sheepishly, saving face by saying he was lucky because the beating would keep him out of jail.

"When you see a grown man beating kids half his size and enjoying it, while they're handcuffed on the ground---it's one of the most brutal, most cowardly things I've ever seen in my life, was the police," said a reveler. People who could see what was coming crossed Esplanade into the French Quarter and escaped. Other instances of humane treatment---the man quoted above said an officer told him, "You don't look like the kind of person who would interfere with an officer doing his duty"---were buried under a rain of riot sticks.

Later, on Mardi Gras Day, a group of people pitched in to hire a police detail for security and closed off the street for an official block party. Nothing changed, except that police did not think the drumming and dancing were illegal. Possibly, because most of the officers present were black, and the crowd was primarily composed of white hippies and punks, the police were on edge. However, the young man who was tossed through the window of the Frenchmen Hotel was black, and this street is always one of the most comfortably multi-racial scenes in the city.

Police tactics and preparedness must be criticized. The State Troopers are typically unfamiliar with the extremes of the celebration and unskilled in community relations. The Sheriff's deputies are the most poorly educated and lowest paid force in town. The deputy who made the first arrest was later criticized by his commander for breaking protocol---but by then the damage was already done.

What last year appeared to be a sleazy fund-raising game by the city---shake down some visitors for six hundred dollars each in bail and fines---has developed into a yearly police tantrum. With over seven hundred arrests made throughout the holiday, up three hundred over 1998, NOPD claimed a safer Mardi Gras.

That depends upon which end of the riot stick you're on. With the New Orleans Jazz and Heritage Festival approaching, and more street parties on Frenchmen in the offing, visitors should beware. ##

CLICK HERE TO GET TO INDEX OF COLUMN FORTY-FIVE