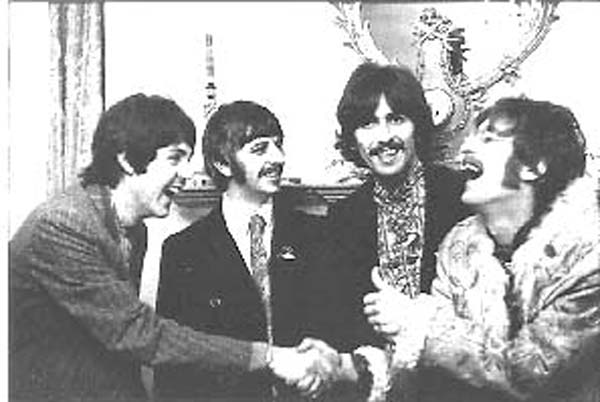 [In which I introduce the Beatles to both Bob Dylan and the evil weed, something that makes me believe THE '60S WOULDN'T HAVE BEEN THE SAME WITHOUT ME.]

The latter occasion was at the Hotel Delmonico on Manhattan's Park Avenue on August 28, 1964. The Beatles and their manager, Brian Epstein, had just finished eating their room service dinner when Bob Dylan and I pulled up in Bob's blue Ford station wagon driven by Victor Maimudes, Dylan's tall, slender and very sephardic-looking roadie. Victor carried the stash in his pocket as we made our way through the mob of teenyboppers on the sidewalk and into the hotel. I think it was my stash, but I can't remember for sure. I'd like to ask Victor himself if he remembers. In fact I'd like to ask Victor whatever else he remembers about that night, so I might include Victor's version as part of this story, but he refuses to talk to me. Why not? I never had any falling out with Victor. Has Bob ordered Victor not to talk to me? Bob has rehired Victor as his road manager after many years and now Bob doesn't talk to me any more, either, although I haven't the faintest idea why not. I must have done something wrong again. But then that's the way Bob treats everybody. To him, we're all a pile of old shoes. Me, I consider Bob one of the greatest artists ever born, but he's not the kind of guy I would trust with my wife. Unfortunately, I already once did. But then, I've also learned that as infirm, impotent and irrelevant as I might have become, you can't trust me with someone else's wife, either.

In the Hotel Delmonico lobby, cops blocked our access to the elevators until No. 2 Beatles road manager Malcolm Evans, who was by that time getting to be a buddy of mine, descended to the lobby to escort us through the police lines. When we got to the floor of the Beatles' suite, the elevator doors opened on a hotel corridor crawling with still more cops plus there was an overflow from the suite next door to the Beatles. This overflow included reporters and photographers and radio and recording and TV personalities the likes of Peter, Paul and Mary and the Kingston Trio, all of whom were being charmed by Beatles press officer Derek Taylor while awaiting their turns to meet the Beatles in the suite next door. I doubt the Beatles ever got around to meeting any of them on that particular night.

Mal led us directly through the melee and into the Beatles' suite, where I introduced everybody to everybody with an awkwardness for which I will always hate myself. Allen Ginsberg would afterwards ask me if this initial meeting between Bob and the Beatles was "demure." That is exactly the right word for it. Drugs have colluded with time to erode my memory of the typical style each one had of coming on to one another. I wish I'd had a tape recorder, but no, I don't remember whatever small talk accompanied the handshakes, smiles and greetings they exchanged. At that time, I thought Bob's smile could turn on the world, and when Bob aimed it at the Beatles, they reflected its glow with their own happy charisma. Yes, Billy the Kid and the Jesse James Gang bubbled shyly like bashful little girls.

There was also Beatles manager Brian Epstein with his wide grin and elegant gayness, who tried to take charge of things, but who also seemed to wag like the bulldog's tail, the bulldog being John Lennon, the gang's

ringleader. Bob and the Beatles all needed room to swashbuckle, but nobody wanted to step on anybody else's ego. Looking back, I still see that evening as one of the greatest moments of my life. Actually, I was well aware at the time that I was brokering the most fruitful union in the history of pop music, certainly up until then. My aim was to make happen what did happen, which has been some of the greatest music of our time. I was pleased by the thought I was engineering, participating in and chronicling a milestone moment in history. Plus, as a journalist, I also knew I was setting up a very big scoop for myself, even though, as things have turned out, nobody now wants to print it. [Well, that's not entirely true. Q Magazine, allegedly Britain's equivalent of Rolling Stone, printed a version of this very piece you're reading right now in its edition of May, 1994.]

As for our Latter-day Billy the Kid and England's pop-style Jesse James Gang, all their first few get-togethers could be described as demure. And all of them were left for me to arrange. I was the go-between. In those days, I was in the middle of everything. By this time, I already had networked together one of the world's greatest collection of potsmoking pop stars, poets, painters, personalities, plus my jazz contacts, featuring Miles Davis and also my wide circle of writers, music tycoons, movie actors, and other entertainment artists. But to put Bob Dylan and the Beatles together was my crowning achievement. If I'd had one stinking iota of junk bond swindler Michael Milken in me, I would now be worth millions for all the music mergers I arranged. But I guess I wasn't enough of a hustler and a con man to compete with the sharks, wolves and snakes with whom I had to deal. So now, I'm just a poor, broke, forgotten and ignored blacklisted journalist who has to give away all my stories free on the Internet because I don't want to wait to be published posthumously. Boo, hoo.

Back then, I was just a proud and happy shadchen, a Jewish matchmaker, dancing at the princely wedding I'd arranged. Buttons popped off my shirt. This was a marriage made in heaven. I knew I was stage-managing a major event, certainly in the history of pop and maybe even in the overall history of culture. As Peter Brown and Steven Gaines have written, this "small but auspicious event" would grow to affect the consciousness of the world. In some vague sense, I knew I was helping Hercules divert the mainstream, which would soon eddy in pop's psychedelic era. The trouble is that when buttons pop off your shirt, that's a sign you're getting fat and arrogant. And when you're arrogant is when you start walking on thin air. Guess what happens then?

To find out what happens next... Read Al Aronowitz's book "Bob Dylan And The Beatles, Volume One of the Best of the Blacklisted Journalist".

As the man who introduced Allen Ginsberg to Bob Dylan, Bob Dylan to the Beatles and the Beatles to marijuana, Aronowitz---acclaimed as the "Godfather of rock journalism"---has been known to boast: "The '60s wouldn't have been the same without me."


"Bob Dylan and the Beatles" is temporarily out of stock.

CLICK HERE TO GET TO INDEX OF COLUMN TWO