THE FIFTH BEATLE
or
EVERYBODY HATED MURRAY 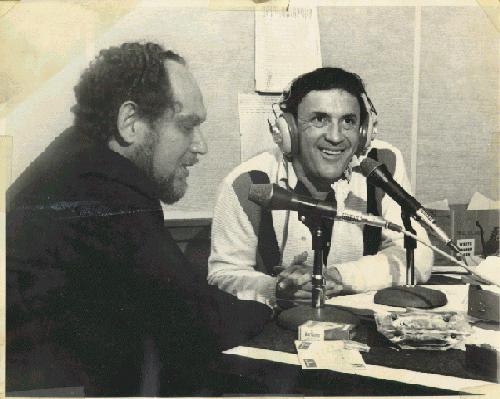 Ah, vey! Ah, vey! Everybody hated Murray, hated him for his power and his success, hated him because he screamed and hollered and wore tight pants, hated him because he forced his ego down your throat like a hard-sell used car dealer who makes it seem like you're going to buy the car anyway but you've also got to take him along as part of the deal. Murray's ego was always too big for you to swallow. It could get stuck in your gullet and gnaw on your craw and hang heavy on your digestion like a balloon of cold fat. Murray had a style that somehow couldn't get the job done without rubbing against the grain. But he had a style.

They hated him because he was brash and outrageous, like his rakish hats and his 62 outfits, lavender striped shirts, elf boots, Russian hats, flipnik jerseys, all earned by the cynical twist of his mouth, by screams, grunts, giggles, yuks, gasps, gargles, falsettos and a machine gun delivery of jive talk, into the microphone, baby, Broadway hep, dialect street gang, Under Assistant West Coast Promotion Man Lah-dee-Dah, Nigger English, Ah, vey!, beyezull sheyezit. They hated him because the kids loved it, and here was Murray, raping their minds like a dirty old miser. He used to make maybe $150,000 a year, maybe a lot more, Murray the K, who wouldn't take no for an answer, the walking definition of chutzpah, the kind of guy who'd use your front step for a bathroom and then ring the doorbell to ask for toilet paper.

They hated him because he dared to pander to underage taste, because he dared to understand what his audience wanted, because he dared to blow his pied pipes to the young, stealing their loyalty from their mothers and coaches and teachers and fathers and principals and troop masters and PAL pals and all the other parental authorities who wanted their kids to grow up to be them and certainly not like Murray the K, leading them off to places they could never get back from. Remember 1010 WINS and the Submarine Race Watcher's Club? "Submarine race watching," says Murray, "well, what's a cheap date but to take your girl and to drive somewhere and park and look out over the ocean or the river or a lake? 'We're going to watch the submarines, honey... Well, honey, you can't see 'em, but they're there, racing in the water.'"

The Submarine Race Watchers' Club, a cheap date, take your girl and park by the water while, from the dashboard, you listen to 1010 WINS, Murray the K and his Swingin' Soiree. Once Murray announced he was going to make an appearance at Plum Beach to preside personally over a meeting of the club. He never got there. On the way he found himself glommed up in a traffic jam that had the Belt Parkway tied up for 10 miles. "What's happenin'?" he asked a cop. "Oh," the cop answered, "some crazy disc jockey announced on the radio that something was going on at Plum Beach." They hated him for things like that.

Or the time they asked Murray to help stop the street gang wars in Brooklyn. He scheduled a meeting at Boys High in Bedford-Stuyvesant, went to the gang leaders and told them to bring their gangs. The place was mobbed, but well behaved. Afterwards, the National Review commented it was a damn shame that the only dialogue the kids could relate to was with a frenetic, ungrammatical person like Murray. They hated him for things like that, too.

Murray got the job of putting together a 60-minute OEO TV special, It's What's Happening, Baby, featuring a cast of rock stars he got together for free and a message directed against dropping out. One senator called the president of CBS during the program to say he was throwing up. Another senator called it immoral, lousy and double lousy. They hated Murray for that, too.

I wrote what you've just read as the first of a series of columns about Murray the K in 1971, when I found him forgotten in self-exile in Washington, D.C., where I, too, was later to be forgotten in self-exile. He was living with an ex-cover girl named Judy Black, who charmed me into being depressed that I didn't have whatever it was that Murray had, but then Murray was famous for his squeezes. They hated him for that, too. I remember the first American Beatles tour back in 1964, when getting in to see the Fab Four was as easy as giving a hotfoot to the Pope. The Beatles were renting half a floor at the Deauville Hotel in Miami Beach, with fans trying to climb up through ventilator shafts, and when Murray emerged from the elevator with two dream foxes, Paul McCartney had to rescue him from being kicked back downstairs by the Nobody-But-NOBODY-Gets-In-Here Squad. I was standing with Brian Epstein as Paul ushered Murray and the two ladies into his room and then closed the door on them so he could say to Brian, "Tell them Murray's alright---he always brings the best birds."

To find out what happens next... Read Al Aronowitz's book "Bob Dylan And The Beatles, Volume One of the Best of the Blacklisted Journalist".

As the man who introduced Allen Ginsberg to Bob Dylan, Bob Dylan to the Beatles and the Beatles to marijuana, Aronowitz---acclaimed as the "Godfather of rock journalism"---has been known to boast: "The '60s wouldn't have been the same without me."


"Bob Dylan and the Beatles" is temporarily out of stock.

NEXT: HANGING OUT WITH BOB DYLAN AND THE BEATLES

CLICK HERE TO GET TO INDEX OF COLUMN EIGHTEEN