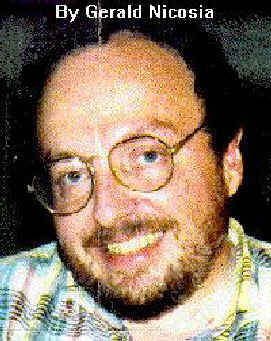 At 51, he was slender, handsome but getting crinkly-faced, with still a mane of straight blond hair just starting to grey.  He was easily the most debonair and worldly-wise man I'd met up to that point.  His knowledge of women, for instance, stunned me---but I was a green kid, a former Catholic from the good old Midwest.

He talked about women he'd fucked the way my neighbors in Lyons, Illinois, might have talked about tomatoes they'd bought in the market. I couldn't help liking the guy.  He was defensive with me at first---and it was clear he still hated "the murder" of David Kammerer being brought up with his name attached.

There had just been a really salacious piece about the killing in NEW YORK magazine, I think, by Aaron Latham, and Carr was still smarting from it.  He had three kids and didn't want them

thinking badly of him.  But once he saw that I was OK, just a little naive, and that I really loved Jack's works, he opened up to me.

He told me how impressed he'd been by Jack's looks---"the coal black hair, the startling blue eyes"---and how he was even more amazed by Kerouac's huge heart.

"Every person Jack met was someone new for him to love," he told me, and I could hear the love for his friend in Lucien's cracking voice.  Later, and on a few other occasions, he took me back to his loft, where his dog peed on my shoulder bag and recording equipment.  He just laughed at my embarrassment and misery.  He was a tough cookie, and he wasn't going to allow me to tape anyway.

I regret that, since it would be so wonderful to hear his voice now on tape, talking about those early days with Jack.  (Even though, as of this writing, all 300 MEMORY BABE interview tapes are still locked up at U Mass, Lowell, special collections, because of threats from John Sampas. And I am still fighting a lawsuit to try to free them.)

What I have are my notes from that interview, which at least will never be put under lock and seal.  Lucien told me never to take Jack too seriously when he wrote---that he invented more than he admitted.  Jack wasn't really in love with "Mardou Fox" (actually Alene Lee, also now deceased) in THE SUBTERRANEANS, Lucien said.  She was just good sex, but Jack had inflated it for the sake of the novel.

I later learned that Lucien himself had had an affair with Alene---and that when he'd refused to marry her, she set fire to his house. These were crazy, wild people who led the most improbable of lives, and they were all lucky to have had Jack Kerouac to chronicle those lives, or most of it would now be forgotten.

Lucien clearly knew this and felt that way---gratitude to Jack for making him a "hero" in the DULUOZ LEGEND, even though he was mad that Jack finally broke his promise never to write about the murder---since he told almost the full story in VANITY OF DULUOZ. Despite having spent two years of his youth in a reformatory, Lucien clearly regarded himself as a lucky man.  And frankly, I feel lucky myself that I got to know him too---if only a little. Rest in peace, Claude de Maubris, with your chewed-up beer glasses and Lautreamont under your arm.  You inspired a great American writer.