Kevin Twigg (born Jan 24, 1956, Port Jefferson, NY. ): got hooked on music after his first paying gig, which was an all girl slumber party while in the fifth grade. Early on, friends Chip Watterson, Winston Clark, and guitar master Warren Haskell encouraged him to listen to all styles of music, and he took their advice. In his teens, he continued gaining experience playing rock, theater, and symphony concerts around the Long Island, New York area, and as well in a jazz band with Jim Filiano and his brother, bassist Ken Filiano. it was Jim that introduced the 15-year-old Twigg to David Amram, who would turn out to be a major influence. In 1973, while still in high school, Twigg performed with the New York All-State Orchestra. He graduated high school early, to study percussion with James Preiss.

The place to eat and hear jazz was the West End Bar, where they were still talking about the beat generation gang that often met there.

He continued playing pop music, and along with Marty Henne and bassist Jeff Ganz, provided the rhythm section for several recordings, including those of model/restauranteur Barbara Smith and actress Donna Pescow. He assembled musicians to perform Mary Lou's Mass, under the guidance of composer/jazz legend Mary Lou Williams at Mary Lou's home Church in Harlem. The band included Kenny Kirkland, Angel Fernandez, Cecil McBee,Jr., Kevin Twigg, and fellow Long Islander Chip Watterson. During the late 70's, he was invited many times to sit in on percussion with David Amram, therefore having the opportunity to perform with jazz greats such as Amram, Pepper Adams, Jerry Dodgien, Victor Venegas, Elvin Jones, Beaver Harris, Johnny Allmendra, Lyle Atkinson, Brian Torff, as well as Charlie Chin, David Bromberg, the Clancy Brothers, and many others.

After college, he moved back to Long Island, married and took a job as a Catholic School music teacher. When his first of two children arrived, he left that job to seek a better paying job, as a firehouse custodian. he continued to teach privately, which he had been doing since the age of 16. As well, he coached several marching band drum lines, played in R & B and wedding bands, and performed in many Long Island theater productions. One highlight was the world premiere of The Case of the Dead Flamingo Dancer by Dan Oliver and Dan Butler (WKRP in Cincinnati), featuring Broadway/TV/Movie stars Harry Groener and Kelly Bishop. Also performed in the premiere of The Jabberwocky, by Peter Winkler.

The nineties, with the development of home computers featuring midi sequencing, made it easy to collaborate long distance with his old college friend Joe Aebig, and together they wrote a wide variety of music, some of which was broadcast on TV.  As a hobby, he dabbled in computer programming in Turbo Pascal. He did some cabaret and many clubdates around New York with Phyllis Grande and Joe Dumas, who was the bassist with the Ed Sullivan Orchestra at the time the Beatles were appearing on the show. He also began his association with a blues group called the Mojos, based in Eastport, NY, and The Blue Mesa Band.

Currently, Twigg is enjoying his association with Paul Serrato and Co., which has a CD on the jazz radio play charts, called Origami, on Graffiti Productions. Also on the recording are Paul Serrato-composer/pianist, Bryce Sebastion-bass, Reggie Pittman-trumpet, Henry Morales-congas, and LD Frazier-vocal.  ## 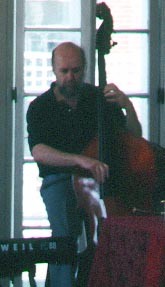 Bassist John DeWitt has studied at the Mannes College of Music, the Aaron Copland School of Music at Queens College, and SUNY Stony Brook.  His bass teachers have included Julius Levine, Homer Mensch, Richard Davis, Mike Richmond, and Victor Gaskin.  John performs regularly with the Sound Symphony Orchestra as well as various jazz ensembles and has performed with \Bo Diddley, Al Martino, and Edie Adams, along with many others.  Most recently, John has been honored to play with David Amram and Kevin Twigg.  ##

NOW AVAILABLE!
ON THIS 40TH ANNIVERSARY YEAR OF BEATLEMANIA!