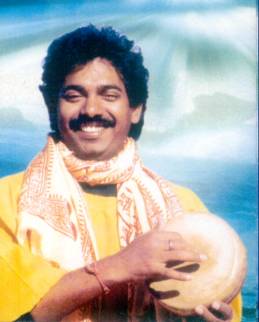 Krishnendu das aka Babukishan comes from an old and very traditional Baul folklore family. His grandfather, Guru Shri Nabani Das Baul, was a much celebrated singer and poet that was instrumental in bringing the Baul culture to fame with the respected and admired status it enjoys today. Nabani Das Baul often collaborated with the writer of India's National Anthem, a great poet, and winner of the Nobel Prize for Literature in 1913, Rabindranath Tagore. In popularizing the music of the Baul.

Nabani Das Baul opened the doors for his people to the world. In keeping with this tradition. Babukishan's father, Samrat Purna Das Baul, a modern, popular legend among the Bauls, opened up the doors even further by collaborating and jamming in live performances with the top Western and European acts of the 20th century.

Babukishan, deeply inspired by his Father and Grandfather, knew at an early age he too wished to compose and perform. He began on the soil of Bengal but clearly he was destined to belong to the world of music. His journey started in early childhood when he joined his mother, Manju Das, and his father, Puma Das, playing and singing Baul music in global festivals. Despite the many world tours, Babu also found the time to study Indian philosophy and Folk music at the University of Kolkata where he eventually secured both his BA and Masters degrees.

So it was that his formal professional career in music began with his family. He toured with Bob Dylan's The Band East & West tour in 1985. In addition, Babukishan has performed with other international artists such as Alice Cooper, Rolling Stones,Tom Petty, Miles Davis, Allan Fakir, George Harrison, Herbie Mann, Third World, Robbie Robertson, Garth Hudson and many others.

Though the subsequent years, Babu put this solid foundation in music to good use by composing and performing in all areas of India's entertainment industry as well as in a variety of venues worldwide. Then, in keeping with his early dreams of a unique style of his own, he turned to the music of the western world that he had become so familiar with in his early years of performance. His use of Baul & Indian rhythms combined with the Reggae produced his own brand of World Music---Babu's New Age, Bengali Folk Fusion is the result.

As a composer, Babukishan has written the music for several albums, TV serials and films, earning a good reputation as one of the most promising composer in the Bollywood (Indian cinema) music & film industry of India. In his recordings, Babukishan features folk music, romantic songs, pop songs, ghazals, Qawwalimusic, new age, fusion, Sufi music and bhajans (devotional/spiritual songs). He is the first singer and music composer from the rich Baul family tradition to venture into fusion music by combining Baul/Sufi music with western music and reggae music. Babukishan produced and directed two documentary films about folk music and he wrote a book titled The Bauls of Bengal. One of Babukishan's latest projects is the band "Birds", which he founded. It combines new age, world music/traditional folk and fusion music. His album Soulmate" (Universal/Music India) creates a unique new generation music worldwide.and his latest album, Birds, is based on Baul/Sufi music.  ##

NOW AVAILABLE!
ON THIS 40TH ANNIVERSARY YEAR OF BEATLEMANIA!