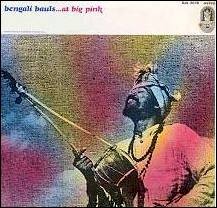 [The following was originally written as liner notes for a record album called The Bengali Bauls at Big Pink, released on the Buddah label. Garth Hudson was the producer.]

It is December of 1967 and the Bengali Bauls want to get it on.

They are a street group from the dusty ruts of Calcutta, where you can drive 70 miles out of town and find yourself in posted Tiger country.  Of course you've heard of Ravi Shankar but what the Bengali Bauls play is India's soul music.  You really have to have crawled through the black muddy bottom of the earth to become a Baul.  On the other hand you really have to be exalted.

They have been living in an apartment over a converted barn down the road from Albert Grossman's house for three months now, laughing and rollicking like a bunch of otters on a slippery riverbank.  The word Baul itself means madcap, handed down through the ages like a fool's scepter, defying injunctions, canons, customs and rules, carried from town to town through northern India like a virus of joy while the local gentry slams its shutters, trying to keep out the infection.  Like wild jokers, they can fit into any company, dancing as they walk with nods of yes to everything.  It was Allen Ginsberg who first told Albert Grossman about them, with rumors of a street choir that curled as it sang, like a group of angels on a Christmas card.  Those impish twinkles in their eyes?  It's as if they know something groovy that you'd like to know and if you'd just let them burst into a song, you might find out what it is.

At the barn, everyone has come around to meet them.  Bob Dylan, practicing each afternoon with The Band in the cellar of Big Pink, drives over for a visit from his house on a nearby mountainside and poses with the brothers Purna and Luxman Das in a Polaroid snapshot that is later seen by millions on the cover of John Wesley Harding.

Purna sings lead.  Luxman plays the khrmack, which is like an inverted bongo drum with two gut strings attached from the inside of the hide to the membrane on a small cup.  You put the bongo drum under your arm, pull on the cup and pluck the strings with a khrmack pick.  There's also Hare Krishna Das, who plays the dotara, a stringed instrument resembling a cross between a mandolin and a banjo, and Sudhananda Das and Jiban Das, who play the harmonium and the tabla, respectively.  All Bauls, of course, are brothers, although only Purna and Luxman, who lead the group, come from the same father.

In their guest cottage, they oil their bodies every morning, sleep each afternoon and cook for themselves.  Indians have their own style of kosher.  As den mother, Albert's wife, Sally, goes around telling her friends about this strange brood of house guests, with black shiny hair down to their waists and erupting smiles of spiritual bliss.  To explain them, she gets a book by Rabindranath Tagore, the poet, scholar, and Nobel Prize winner, who was a friend of Nabani Das, the father of Purna and Luxman:

"What need, say they, have we of other temples?  Is not this body of ours the temple where the Supreme Being has His abode?"

The Bauls cut across the lines that divide Hindu from Moslem and invite all the lowly to join them.  Are the Bauls a religion?  The street is their place of worship. God is their Man of the Heart.  If others look down on them, why, then, as Tagore says, "Truth cannot be communicated to those on whom you look down.  You must be able to see the divine light that shines within them, for it is your own lack of vision that makes all seem dark."

They have played the Fillmore in San Francisco and Town Hall in New York and they have recorded an album for Elektra.  At Town Hall, they were on the same bill with Paul Butterfield who had invited them to play at the concert.  At the Fillmore, they appeared on the same bill with the Byrds after being whisked, practically, from the airport to the stage, arriving from Calcutta just in time for the date, exploding off the jetliner in the brilliant flaming orange of their dhotis.  Bauls deliberately wear the garments of both the Hindus and the Moslems, no small provocation in a country where insanity is called "the wind disease".

Only a few years ago, India looked at the Bauls like punchlines walking around in search of a joke.  Now their music is considered a national treasure.  In his scrap book Purna carries photographs of the Bauls in Leningrad, where they had performed as part of a proud cultural exchange.  He also has pictures of himself with Indira Gandhi.  He sits on the platform with her now when she goes campaigning through his territory.  It was a friend who had brought the Bauls to visit Albert and Sally in their suite in the Grand Hotel in Calcutta.

When they piled into his room, it was with their instruments and a retinue.  Albert ordered food.  Purna sang.  In his head, Albert started making arrangements for them to come to this country.

After their debut at the Fillmore, the Bauls discovered America by driving cross-country with Tom Donovan, a one-time Honolulu night club owner who had appointed himself road manager and interpreter of the group in San Francisco, translating in pidgin English that the Bauls themselves hardly understood.  The Bauls are thigh-slappers.  Make them laugh hard enough, and they'll even slap yours.

When they can't find the right word to explain something, they'll touch you, and you'll know it doesn't matter anyhow.  Driving cross-country, Donovan had to listen all the way to choruses of the Bengali equivalent of "Wow! Look at that!"  In New York, the Bauls mooned out over the

Even in Woodstock, N.Y.,
the Bauls still get uptight
about tigers in the woods

bridges along the Harlem River Drive.  When they got to Woodstock, they couldn't believe you could have that much forest without any houses and not have tigers, too. Now it is December of 1967 and when Sally takes them for a drive, they still get uptight about tigers.  Sally, they call "sister" now. Albert is a "brother-of-the-heart."  But after three months they want to get it on.  The Band invites them to visit Big Pink.  Tommy Donovan drives them over.

Big Pink sits atop a mountainscape in Saugerties, outside Woodstock.  The Band rents it at $125 a month, a house that you'd more likely expect to find in development row on some horseshoe street in suburbia.  Upstairs, the furnishings include a knick-knack shelf.  But downstairs is The Band's equipment, with enough electronics to raise a baby satellite.

When the Bauls come over, they look at the pictures on the walls, drink cognac and generally loosen up.  Imagine, if you can, a group of wind-afflicted Indians sliding down banisters in a house that doesn't have any.  They get hung up in some bubbling water and dancing lights in a beer display that's been taken from one of the local gin mills and posted over the mantelpiece.  When they play The Band at checkers, naturally they lose.  They begin to argue among themselves.  About what?  Who knows?  Hare Krishna Das turns out to be the life of the party.

"What's your name?" someone asks him.

With a little research, The Band learns that Hare Krishna is as common a name in India as John Smith is here.  They exchange addresses and telephone numbers. Finally, they take the cushions off the sofa in the living room and bring them down the cellar so they can sit comfortably on the floor.  When they perform, it's cross-legged.  At first, The Band joins in.  Charles Lloyd, visiting with his saxophone, is also there.  But The Band isn't interested in raga rock and neither are the Bauls. Nobody seems to know what's going on, so The Band gets up and lets the Bauls play.

Garth Hudson, The Band's organist and technician, turns on the tape recorder, a simple stereo Ampex that pianist Richard Manuel had picked up somewhere for $140.  Garth twists and turns the dials to get the right levels. Meanwhile, the Bauls warm up in steps of talent.  While the recording gets better, so do the Bauls.

According to an unwritten law, the worst singer of the group goes first and the best sings last.  Everyone seems to know his turn without being told.

"There's nothing really to say," remembers The Band's guitarist, Robbie Robertson, listening to the tapes months afterwards, "except that it really did happen that way.  They were playing for themselves, they weren't playing for us."

And then: "Praise my beautiful birth land... For you the world cries, but who will the world cling to while crying?"

Hare Krishna is the third singer, and by now everything's cooking.

"My boatman friend off the ferry crossing... When you are the boatman, my friend of the poor, will my day go wasted like this?"

At long last, it's Purna's turn, Purna, the greatest of India's Bauls, who has walked since childhood across his country's tear-stained face at the heels of his father, Nabani, learning 5,000 songs of the soul, with each one now at the tip of his tongue.

He tosses his head, his voice reaches up toward heaven.

At the end you can hear bass guitarist Rick Danko and drummer Levon Helm joining the rest of The Band in respectful admiration:

This tape was stored away with all the other Big Pink tapes like home movies and snapshots for a family album never mounted.  Some tapes of The Band and Dylan that were made at Big Pink were stolen or copied to be bootlegged on the Black Market.  Probably the Baul tape would have been forgotten except for Tommy Donovan, who demanded a copy for himself.

After the Bauls went back to Calcutta, Donovan sent the tape to a studio to be processed for the stereo deck of his convertible.  Afterwards, he would ride through downtown Woodstock with the top down and the volume at full-blast, a full-fledged believer in a four-wheeled hi-fi.  Of course, he played it loud enough to someone else to hear it, or this album never would have come out.  Stereo?  Garth considers the tape to be as good as any field recording, but listen to the tabla, which sounds like huge bubbles coming up through a deep pool of bass.  Listen to the presence and the separation as the Bauls dance out of your speakers and you will hear why this record can become a classic just for sound freaks alone.

"The waves of love river are heavy," they sing.  "How will I ride on it?  Your crazy servant of God waits for you on this side of the river..."  ##